The AlphaPoint is a Nerf laser blaster that was released in fall of 2018 under the Laser Ops series. It requires four "AA" batteries to be operated.

It comes packaged with a Laser Ops armband, a solo attachment, and instructions.

The AlphaPoint is a small, pistol-like laser blaster. The blaster's receiver dome is located just above the muzzle and emitter; firing at this receiver dome will register as a hit on an opponent.

By default, the AlphaPoint has a firing capacity of ten shots. This, along with health points and more, can be upgraded through the use of the Laser Ops Pro app.

Built into the handle is a reload switch, which "reloads" the blaster when low on laser ammo. This can be used to switch between three team colors prior to game: blue, red, for team matches, and purple, for free-for-all matches. When a player runs out of hits, the light deactivates to show they're out of the match.

Unlike the DeltaBurst, the AlphaPoint is too small to have a screen to track gameplay information. Instead, it is tracked by LED indicators in the back of the blaster; this only tracks health and ammo remaining, however. If the player wishes to play with a smart phone, the solo play accessory can be attached to the front to hold a smart phone in place; alternatively, the player can use the armband to fix their phone to their arm. 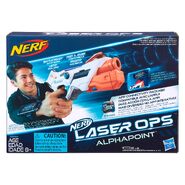 The packaging for the AlphaPoint. 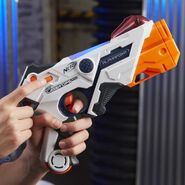 The AlphaPoint being prepped for use. 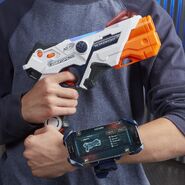 The AlphaPoint, connected to a smartphone. 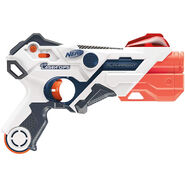 A 3D render of the AlphaPoint.
Add a photo to this gallery

Retrieved from "https://nerf.fandom.com/wiki/AlphaPoint?oldid=188463"
Community content is available under CC-BY-SA unless otherwise noted.