The Allegiant Six-Shot Blaster is a Nerf blaster that was released in spring of 2016 to promote the Allegiant film from the Divergent series.

It comes packaged with six Collectible Darts, a Divergent sticker sheet, and instructions.

The Allegiant Six-Shot Blaster is a revolver-style with a six-dart cylinder. It has a single tactical rail on top of the blaster and a strap point built into the priming slide. Two extra darts can be stored in the blaster's handle. It also has the ability to be slam fired.

It is a re-release of the Secrets & Spies Spylight; unlike its original counterpart, the Six-Shot Blaster does not come packaged with a tactical flashlight. 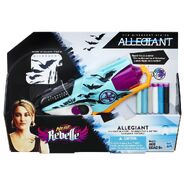 The packaging for the Allegiant Six-Shot Blaster.