The Allegiant Blaster is a Nerf blaster that was released in 2016 to promote the Allegiant film from the Divergent series.

The Allegiant Blaster is a clip system blaster. It features a single tactical rail located on the blaster's priming mechanism, an integrated shoulder stock, and a single sling point on the end of the shoulder stock. Due to the placement of the clip well, a clip loaded into the blaster can double as a foregrip.

It is a re-release of the Rebelle Super Stripes Collection Rapid Glow, sans glow-in-the-dark capabilities. 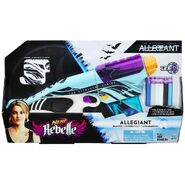 The packaging for the Allegiant Blaster.