Nerf Wiki
Register
Don't have an account?
Sign In
Advertisement
in: Under construction, Articles with unsourced statements, Article stubs,
and 9 more

The Aeon Pro is an Adventure Force blaster that was released in October of 2020 under the Tactical Strike series.

The Aeon Pro is a clip system blaster. It is essentially a smaller version of the Nexus Pro with a slide-action priming mechanism and no shoulder stock attachment point. It has a short Picatinny rail above the muzzle and a subtle set of iron sights on the priming slide and barrel.

It is compatible with Nerf clip system clips and darts.

It advertises a firing range of up to 125 feet (thirty-eight meters).

In 2021, this blaster alongside with Nexus Pro was re-released under the Dart Zone Max series for Canadian and European markets.[citation needed] 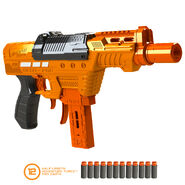 A 3D render of Aeon Pro with an early barrel cap design. 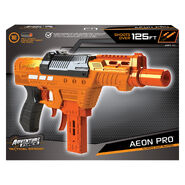 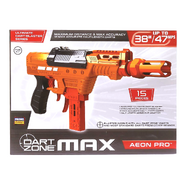 The Dart Zone Max packaging for the Aeon Pro.