An AccuStrike Dart is a type of Nerf dart that was released in 2017 under the AccuStrike Series.

AccuStrike Darts are clip system-compatible darts that are similar to Elite Darts, with the main difference being their unique spiraled dart head. They are backwards compatible with all blasters that use Elite Darts.[1]

They feature the use of a flat head with molded spiral indentations which are designed to help the darts fly in a more consistent straight direction. According to Hasbro, the darts are supposed to spin when fired[2], but this has never actually been demonstrated to be true. They have the same weight, distribution, and center of gravity as standard Elite Darts. Hasbro designed AccuStrikes with a flat head to maximize consistency and improve accuracy.[citation needed]

Hasbro engineers purportedly spent over two years designing the AccuStrike Dart.[1] However, similar third-party flat tipped dart designs had existed for some time before the release of AccuStrikes, all of which exhibited similar performance characteristics.

The flat tip design was used to create AccuStike variants of the Mega Dart and ULTRA Dart in 2018 and 2021, respectively. However these darts lack the unique spiral indentations in the head and are essentially cylindrical in shape.

AccuStrike Darts have been with the following color schemes: 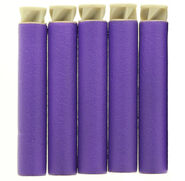 The purple Rebelle variant of the AccuStrike Darts. 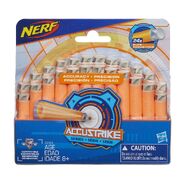 The original packaging for the twenty-four dart refill.