Abraham's M16 is a Buzz Bee blaster that was released in 2016 under the Air Warriors series to promote The Walking Dead comic book series.

It comes packaged with an eight dart clip and twelve The Walking Dead Darts.

The Abraham's M16 blaster is a clip-fed blaster with an integrated shoulder stock and a carry handle built into the blaster's priming mechanism. A clip release button is located just behind the clip well. Similar to the Ultra-Tek sub-series, it is compatible with Nerf clip system clips and drums, as well as Elite Darts and other variants.

It advertises a firing range of seventy-two feet (twenty-two meters).

A later re-release of Abraham's M16 saw its firing performance boosted to an advertised one hundred feet (thirty meters). 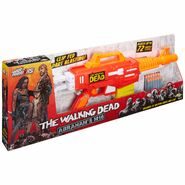 The packaging for Abraham's M16. 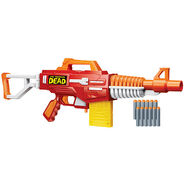 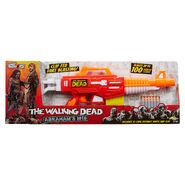 The packaging for Abraham's M16, with the boosted firing range claim.
Add a photo to this gallery

Retrieved from "https://nerf.fandom.com/wiki/Abraham%27s_M16?oldid=197428"
Community content is available under CC-BY-SA unless otherwise noted.