The Abolisher ZR-800 is a Nerf blaster that was released in fall of 2015 under the Biosquad sub-series.

It comes packaged with a can of Zombie Repellent, a water canister, eight Zombie Strike Darts, and instructions.

The Abolisher ZR-800 features three forms of ammunition: darts and water or Zombie Repellent. The blaster fires two darts at a time, and uses an intelligent air restrictor, similar to the Rough Cut 2x4. Despite the blaster having a firing trigger, it is used for firing water or Zombie Repellent and not darts; the dart blaster itself is a HAMP-action blaster. There is a place on the back of the blaster that allows the water canister to be stored. The blaster also has a single strap point in the handle. 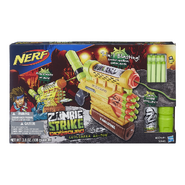 The packaging for the Abolisher ZR-800. 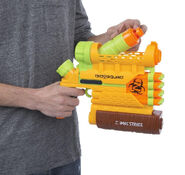 A water canister being loaded into the Abolisher.
Add a photo to this gallery

Retrieved from "https://nerf.fandom.com/wiki/Abolisher_ZR-800?oldid=183140"
Community content is available under CC-BY-SA unless otherwise noted.