The AR-L is a Nerf blaster that was released on March 22, 2019 to promote the video game Fortnite. It requires four "AA" batteries to be operated.

It comes packaged with a ten dart clip, twenty Fortnite Darts, and instructions.

The AR-L is a battery-operated, semi-automatic flywheel clip system blaster. It is based on the legendary assault rifle weapon from Fortnite, colored yellow to reflect its legendary rarity. It features an integrated shoulder stock, one long tactical rail atop the blaster, and two flip-up iron sights. The clip release is located in front of the firing trigger, while the acceleration trigger is underneath it.

The AR-L was first announced in October of 2018[1]; it was the first Fortnite blaster to be announced. It was later given an official release date at the 2019 New York Toy Fair.

The AR-L has been released with the following color schemes: 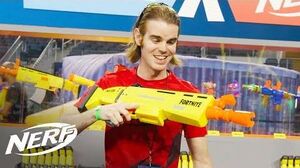