The AR-Goosebumps is a Nerf blaster that was released in fall of 2020 under the Nerf LMTD to promote the video game Fortnite. It requires four "AA" batteries to be operated.

It comes packaged with a ten dart clip, ten Fortnite Darts, and instructions. 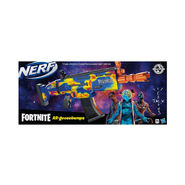 The packaging for the AR-Goosebumps.