The AMP is a Nerf blaster that was released in January of 2021 under the ULTRA series. It requires six "AA" batteries to be operated.

It comes packaged with a six dart clip and six ULTRA Darts.

The AMP was first leaked in 2020 though online listings, under the name PLATINUM AMP. In October, an image of AMP was leaked via Facebook. 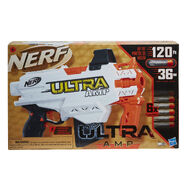 The packaging for the AMP. 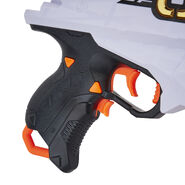 A close-up of the AMP's handle, firing trigger, and acceleration trigger. 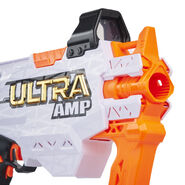 A close-up of the AMP's muzzle.