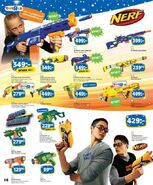 A Toys 'R' Us ad from 2012 featuring an assortment of Nerf and Buzz Bee products.

A Wal-Mart ad from 2012 featuring an assortment of Nerf products.
Add a photo to this gallery

*The term "advertisements" cannot normally be used as a header due to Wikia restrictions.

Retrieved from "https://nerf.fandom.com/wiki/2012?oldid=173341"
Community content is available under CC-BY-SA unless otherwise noted.